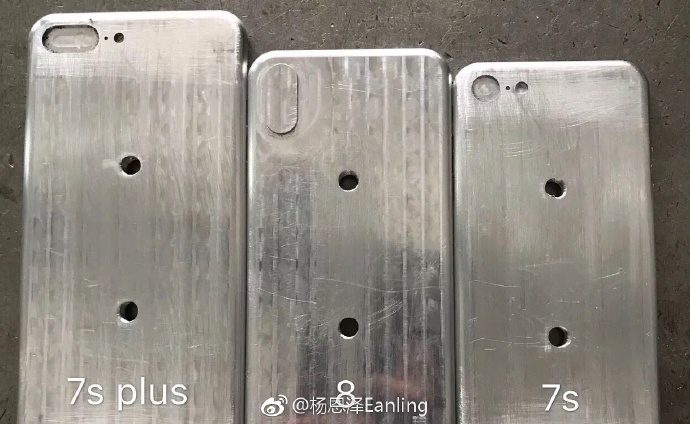 iPhone 8 to have a similar size to the 7S, but a bigger screen.

A few photos of alleged iPhone molds have appeared online, revealing the relative size of the upcoming models in 2017. According to the shots, Apple is going to release three new models later this year. Two of the models will feature LCD display panes, and they will be named ‘S’, following the Apple’s trend to introduce modest hardware improvements to the main line after the first year – in this case iPhone 7.

But the far more interesting model in 2017 will be the device described as iPhone 8, although Apple may give the phone another official name, such as iPhone X or iPhone Anniversary edition. iPhone 8 is expected to introduce a radical new design with curved OLED display and almost bezel-less front.

These pictures of the claimed iPhone molds hint that iPhone 8 will have a similar size to the iPhone 7S /4.7 inch/, although the first will have a massive 5.8-inch display – bigger than the current iPhone 7 Plus (5.5 inch).

We can also draw some other conclusions from the images in this article. There may be a longer power button on the OLED variant, possibly to accommodate the fingerprint reader which Apple reportedly removed from the front size and currently struggles to integrate into the display. Another interesting feature may be the new orientation of the dual-camera on the Iphone 8 – it is in a vertical position.