Kantar has published its latest report about the smartphone OS market shares for the three months ending in November 2017. Despite the mixed iOS performance in most of the markets, Apple had three top-selling models in November. iPhone X was outsold by iPhone 8 and 8 Plus from September to November, but as the iPhone X came late to the market, we expect the latter to be officially number 1 in sales in December-January. Samsung’s flagship device, the Galaxy S8 came at the sixth place in the ranking of the best-selling smartphones, according to Kantar. 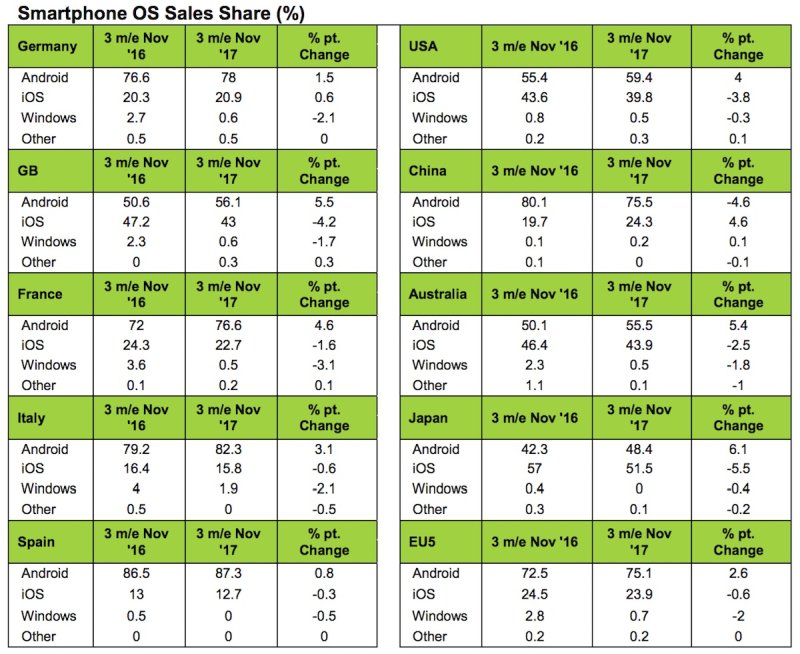 As far as operating systems, iOS grew only in China and Germany. In China, Apple’s iPhones had an impressive growth of 4.6 percent to reach a market share of 24.3%. In Germany, iOS grew 0.6% to 20.9%.

However, in all other markets in the report, iOS lost in the market share, most significantly in the USA (-3.8%), Japan (-5.5%) and Great Britain (-4.2%). But the sales in November only are quite positive for Apple. Kantar Worldpanel said that Apple reached an impressive 49.4% share in the UK thanks to the huge iPhone X demand. The sales should have been good in December too, but analysts predict a weaker demand in Q1 2018.