Apple is again on the fast track with MacBook.

The market research company called TrendForce has published its regular report about the global notebook shipments for the second quarter of 2017. According to the data, Apple remains number 5 in the rank, but Cupertino managed to increase its market share on a quarter-to-quarter basis with 1%. Apple sold 17.1% more MacBooks in Q2 2017 in comparison to Q1 2017. The total shipments of MacBook are 3.98 million, according to Trend Force.

Apple refreshed the MacBook line in June 2017, less than a year before the last hardware upgrade, launching new 13-inch and 15-inch Pro notebooks with better processors and graphic adapters. Another new model is the 13-inch Pro MacBook without the Touch Bar.

Market analysts believe that Apple is about to refresh its 15-inch MacBook Pro once again in 2017, offering a model with up to 32GB RAM for desktop-class performance. 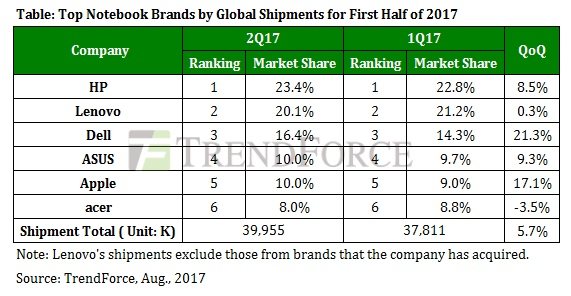 As far as the other key players in the laptop market, we can see that HP remains first with a 23.4% market share. Lenovo is second with 20.1%, followed by Dell who increased its share from 14.3% to 16.4% for a quarter.

The total notebook shipments have increased 5.7% compared with the first quarter in 2017, boosted by the back-to-school sales in the summer.