Following the news about iOS 11 GM (golden master/RTM) version, more information about the new features planned for iPhone X have leaked online. Probably the most interesting finding is the Face ID interface.

Apple has replaced Touch ID with Face ID in iPhone X. Due to the fact that the 5.8-inch OLED model doesn’t have a physical Home button (the other two new models still have it), and Apple could not place the fingerprint reader underneath the display, the company came up with a new authentication solution.

Authenticating with FaceID looks like this (timing not correct because it's just the UI, not actual auth) pic.twitter.com/kvNUARDQBJ

Face ID’s interface has already leaked, two days ahead of the official unveiling, found by the Twitter user G.Rambo. It shows a face that transforms into a smiley face after the recognition. Apparently, in the Settings for FaceID, the user would be able to use the facial recognition not only to unlock the phone, but also for App Store purchases, to fill in passwords in Safari, and more. 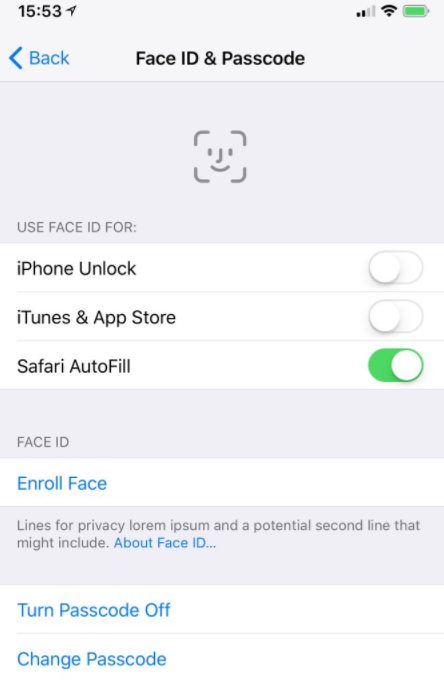 In addition to the Face ID tidbit, we can have a look at the new camera interface for iPhone X /Edition. It has some extra space to accommodate the notch and the home indicator. Another new feauture is the heptic feedback from the camera shutter button.

Apple is announcing the flagship iPhone X along with iPhone 8 and iPhone 8Plus on September 12. Stay tuned for exclusive stories on Apple and iPhone.