Quantity doesn’t mean quality, but the sheer numbers of available apps on Android and iOS at the end of 2017 reveals an interesting picture. Google Play expanded massively, reaching 3.6 million apps in 2017, thanks to the 1.5 million new releases. At the same time, Apple’s Play Store decreased 5% from 2.2 million available apps to 2.1 million.

750,000 new apps were published in the App Store, but multiple factors lead to the decrease in the total number. Apple introduced in 2017 a new policy for publishing apps, and required developers to add support for 64-bit processors. Outdated, abandoned, and clone apps have been deleted too, in attempts to make the App Store free of junk and spam apps. 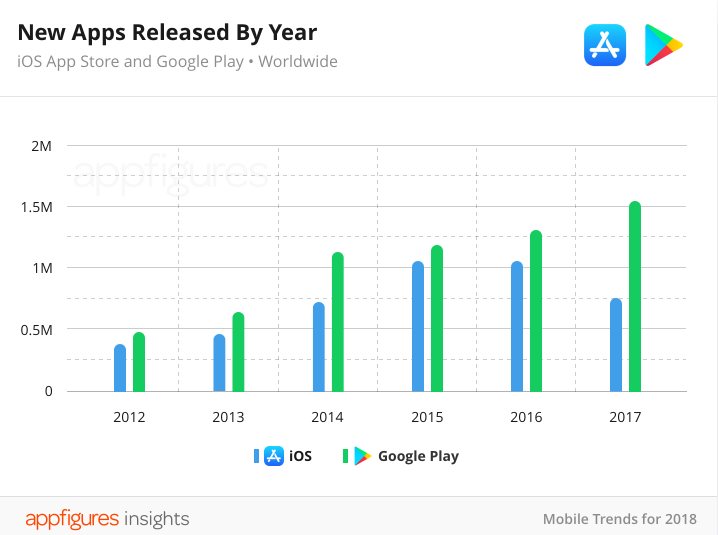 These clear-outs unsurprisingly influenced the graphs, but the newly published apps in 2017 were half less than those for Android. This could be a sign indicating that for the developers is becoming harder to get their aps approved for App Store, or they just prefer to code for the vast number of users on Android. Until 2017, both competing stores had been growing at a similar pace.

The report from AppFigures also reveals some other interesting trends for the mobile app stores, like the fact that only 450k apps (or 8.5%) are cross-platform. 76% of the iOS apps are natively-built for the platform, compared with 90% native apps available on Android.